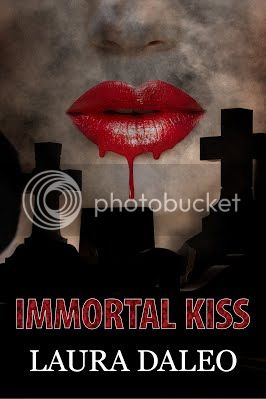 Centuries ago ten powerful vampire gods first walked the earth; their blood thirst knew no boundaries. The destruction of mankind was inevitable. Recognizing their weakness, they selected twelve wise human beings to transform with their godly blood. These twelve, known as The Old Ones and The Council, govern The Ten. A blood lottery appeasing The Ten’s hunger was set forth into the human world and passed down every fifth generation, continuing into the present day.
All of Beth Ryan’s life a mysterious mist has watched over her; a mist she believed to be a vampire. On a cold winter night, Philippe Delon, a 700-year-old vampire walks into Beth’s life. She is drawn to him, certain he is the vampire behind the mist…but is he?
Beth and Philippe cannot deny their love for each other, nor do they try to fight it. Within days of their encounter, Beth accepts Philippe’s invitation to move into his mansion. The mansion unlocks the door to the vampire world and exposes secrets from Beth’s past. Within its walls, she learns the true identity of the mist, her link to the blood lottery, and betrayal of her loved ones. Surrounded by lies, Beth stands before The Council begging for resolution.

Oh, how could a vampire book miss my end of the year list of books read? If there is an entire series with vampires, that’s even better. So I started this one with an open heart.

“Immortal Kisses” is one mountain of twists and political intrigue. There is this history behind all vampires, there is a sacrifice and a naïve girl willing to pay it without knowing. Until she finds out, that is. There is big trouble out there for Beth Ryan. Falling in love with a vampire who ends up betraying her, moving in with the enemy, these are things that do not foretell a good future for her. And I am not even sure if love can conquer all in this book.

I loved the story so much, it was refreshing and brings something new for a devoted reader of vampire books. There are so many twists and so many scenes that will keep you living on the edge. And there is always that question: does he really care for her? Or is it only the blood? Hmm… though one!

Ok, we have it clear that I love the story. Now the characters. It took me a while to understand what role each one plays as there are many out there, but I did not like Beth at all. She was silly and just immature for the life she was accepting. I just could not connect with her.

I cannot say I disliked the book, on the contrary. But just because I wanted more involvement from the main character and I wanted her to man up (actually woman up, but…  you got the idea) I am giving this book 3.5 stars. I loved the story, it’s very refreshing, but I wanted more from the protagonists.

Five years crawled by at a painfully slow pace for young vampire, Beth; each year more agonizing than the next. The powerful unyielding spell which masked Amon’s whereabouts showed no signs of weakening.  Influenced by the binding ritual and Amon’s blood surging inside her, Beth will stop at nothing, and risk everything, to find him and turn the tables on Osiris, Isis, and Hathor.  In foggy streets of London, lives are threatened by a new breed of hunter, and nothing is what it seemed.  Beth once again finds herself surrounded by betrayal.  In the midst of it all, she is forced to choose between Philippe and Amon – knowing that her decision will change one life forever. But whose?

One would think that becoming a vampire, you also become stronger and smarter. Nope, our main character remains unpolished in “Bound by Blood” as well, but we have the same good plot with great action.

It’s difficult to discuss about book 2 without spoiling the previous one, so I’m going to keep this vague, short and simple. Beth is a vampire now (not a spoiler, you got that from the blurb!) and she fights for her loved one(s) and against (maybe) her husband, like some marriages these days. We are still reminded that humans are just food and that vampires are ruthless and hungry. We have vampire slayers and the action becomes more and more intense.

My feelings are the same as for the previous book, which you must read in order to follow up with the action in this one by the way. Good action, not so good characters. Again I failed to connect with Beth and I am really really sorry. But there are so many other elements that captured my attention and I was so curious to see what happened with Amon and where everyone sands in this picture.

All in all, I’m keeping my 3.5 rating and I do hope I’ll manage to increase it in the next book.

Brandon Cass is not your average teenager. He has a taste for blood—human blood. For sixteen years, he stumbled through life without a hitch until the enigmatic aroma of blood awakened something dark within him. Visions of a beautiful young woman with chocolate brown hair and ocean blue eyes haunt his mind, yet her identity is a puzzling mystery.
His hunger for blood strengthens, and the cravings become too powerful to control. No one is safe, not even his family. To safeguard all he once found dear, Brandon sets out on a quest for answers. In an unfamiliar city, he comes face-to-face with the beautiful young woman, confronts the dark force which controls him, and learns what he must endure to reclaim his soul.

Book 3 of the Immortal Kiss series brings a different story, this time with less romantic drama and more with a psychological aspect. We have a teenager dealing with … the monster within! Brandon realizes he may like a different kind of beverage, the kind that runs through the veins. But is he really a vampire?

Again, this is something new, I would even dare say it challenges what we, the vampire readers, may struggle with. We all know vampires are made, they have no souls and they have a body of their own. Laura Daleo comes with something interesting and even bold. I liked it. The plot is amazing, the struggle our main character has to accept and to find out his identity is well done. We have dark and messy scenes that add up to the twisted part of being a vampire.

I liked it even more than the previous two, even if we have some holes in the story here and there. But we have great interactions between the main character and his friends and family and his torment feels very much real.

All in all, I am giving this book 4 stars with all my heart. This was a great read and such a refreshing take on a vampire story. Happy Reading!

Laura Daleo was born and raised in San Diego, California where she majored in Fine Arts at Mesa College. She is best known for her love of animals and shares her home with three humorous Basset Hounds, Stuart, Morgan, and Dexter, her toughest critics. Laura has held positions in several industries, Restaurant, Telecom, Biotech, Research, and Retail. Throughout Laura’s professional career, she furthered her writing skills by taking courses and by joining writer’s critique groups and Writers Digest. She is now the owner of Story Bound Publishing, a fresh voice in the supernatural realm of ebooks and traditional print, committed to publishing unearthly tales of Aliens, Angels, Demons, Fairies, Ghosts, Shifters, Vampires, Werewolves, Witches, Zombies and all other creatures that go bump in the night.