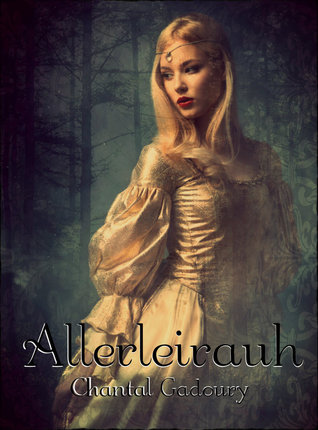 Once Upon a Time…
In the Kingdom of Tränen, a King makes a promise to his dying wife to only remarry someone who has her golden hair. With time, the King finds his eyes are turned by his maturing daughter. Realizing her father’s intentions, Princess Aurelia tries to trick her Father by requesting impossible gifts: dresses created by the sun, moon and stars and a coat made of a thousand furs. When Aurelia discovers his success, she knows she must run away from her privileged life and escapes the kingdom disguised by the cloak and under a new name, “Allerleirauh.”

Aurelia enters the safe haven of the Kingdom of Saarland der Licht, where she is taken under the care of the handsome and gentle Prince Klaus. Hoping to not be discovered by her father’s courtiers, Aurelia tries to remain hidden under her new false identity. Unexpected love is found between Aurelia and Prince Klaus and is challenged with an approaching arranged marriage between the Kingdom of Saarland der Licht and a neighboring ruler. With the possibility of discovery hanging in the air, Aurelia must face the difficulties of her past with her father in her journey of self-discovery before the Prince and his entire Kingdom learns the truth of her real identity, and she looses him forever.

“If you ever decide to remarry, you must marry someone who is as beautiful as I and has my golden hair.” The words seemed to echo all around the darkened, red room as my dying mother whispered them. Candles were lit all across the room, creating a gloomy and death-like atmosphere around us as they flickered against the stone walls; the only solace of light were the flames, curling out from the fireplace.  My mother’s hair, like spools of golden thread, lay against her forehead, clinging to her dying, pale skin as she lifted her hand, reaching out to my Father for his answer. My mother, the Queen, was dying in her bed with my weeping father on bended knee, taking her hand and kissing her knuckles and the corner of her lips.

“My wife…” His words were soft and full of a clouded grief I knew I didn’t understand. My father and mother were hardly ever affectionate behind closed doors. I often saw them together in the throne room, together in my father’s den, but never close; never touching. His loss of her was a mystery to me.

“Promise me,” she hissed at him, her breathing was growing faint as she shifted and grunted, trying to look at him more closely. Perhaps it was her only solace that her husband, my father, would never truly love anyone after her. Perhaps she hoped a new wife would only be a constant reminder of his first.

I stood in the background, watching the scene between my mother and father, clinging to the thick red bed drapes, my own golden curls tied back with a black ribbon. I had been pulled from my tutoring lesson with Mousier Rayner, learning French from the brittle books of my father’s library and had dressed for the occasion of my mother’s death in a simple black dress. I hadn’t known how to feel as the black silk brushed against my skin. I felt almost as if we were being paraded into her room to watch her die like an animal. Was this how life truly was?

We were born, lived the life God granted us, and then, just as quickly, our flame dulls until it becomes a wisp of smoke in a darkened room and we’re gone. As the servants and house-hold hands guided me into the room, I stood frozen in the back. It was often said by the Courtiers I looked much like my mother; I had the same golden hair and the same blue eyes. I wondered now how true it really was. Did I truly?

I felt fear as her last breath slipped between her lips, her hand slowly falling from my father’s shoulder. Everyone in the Kingdom knew the King did not have a male heir, and in turn, would need one to carry on the Royal Line. Who would be next? I could see eyes staring at me; I was my Mother’s reflection: my Mother’s legacy. I felt a cold shiver run up my spine as I heard my father reply, “I promise.”

When I was little, I always asked my dad to read me stories. It was my favorite part of the day. Now, after 20 years, I have the opportunity to review a fairytale with evil kings, princes and princesses, more to my age J

Even if we have such characters, this is not a story for children, but more for grownups, mostly because princess Aurelia has her own issues to overcome. Having ran away from home after being abused by her father, she manages to hide in price Klaus of Saarland  der Licht. They develop a nice friendship but both of them still question the other’s intentions. Aurelia is living in fear that one day her father, or her father’s people may find her.

This is one nice story, with mature characters that in every decision they take or in every situation they may be, their reactions are those of experienced people. I mean she is not acting as a spoiled princess; he is not acting as an infatuated price. Self-confidence is not present all over the book and there is no mistrust because of foolish reasons.

The author manages to keep a firm line between a book for YA and children.  The addition of fantastic elements like dresses made of stardust or sunbeams and coat made of the fur of 100 animals send us is a land of tales of kings and knights. A great escape out of our reality. Great book and I would gladly recommend you give it a try!

Chantal Gadoury is a young author who is originally from Muncy, PA. Chantal enjoys to paint in her spare time, drink a good cup of coffee when she can and appreciates watching her favorite Disney classics with loved ones. When she’s not busy crafting or reading, Chantal is dedicated to her family at home: her mom, sister and a furry-puppy-brother (and her Dad, who has now lives in heaven.) As a 2011 college graduate from Susquehanna University, with a degree in Creative Writing, writing novels has become a dream come true!