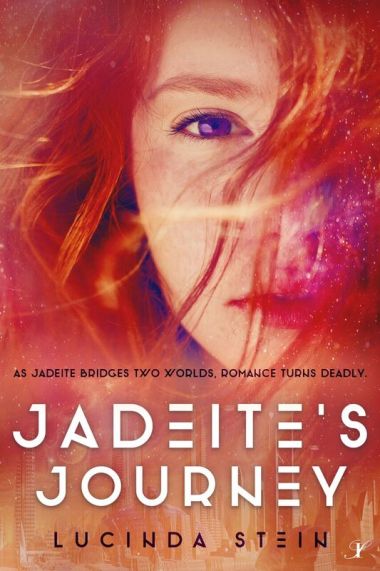 Jadeite’s perfect world comes crashing down on her. In the futuristic world of United Society, her only problem has been how to act around the cute boy on the air shuttle. But Jadeite’s world changes when she comes across a man who looks alarmingly like her father. Clones were declared illegal years ago. When she sees her father, a robotic engineer, headed to the Dark Edge of United Society, she follows him and uncovers her father’s secret life.

Jadeite shadows her father past the boundary of United Society and into a primitive world of canyons and high deserts. She learns her father is a Ridge Runner passing between the two worlds. Even more alarming, she discovers her younger brother, Malachite, is sick and requires medicine only available from over the Ridge. After her father is arrested, Jadeite takes his place in order to save her brother’s life.

But her world turns even more precarious after she breaks up with her obsessive boyfriend, Mattie. Jadeite soon learns his threats are more than words, and she finds her life is in jeopardy.

Lucinda Stain’s book sent me flying in a future beyond my imagination. I was taken aback by the amazing world she has created. Not to mention the plot and characters – which are as well a delight! Once Jadeite finds out that United Society is not exactly what it seems and that the ones she trusted most have a secret agenda – her father or her boyfriend for example – she will have to find a way out, to bring back balance in her life.

What I mostly loved about the story was the impeccable way in which the United Society was imagined by the author. I have read many dystopian novels that imagined a world in our future with people divided by classes, professional achievements or other things like that. But to create a world with no plants, no animals, no paper (!!!) is something different.  Especially since the action is not focused only on mass manipulation, but also on typical teenage issues.

I do believe this book deserves at least 5 stars and it’s a series that I will for sure follow!

A school librarian for over twenty years, Stein now writes fulltime. Sanctuary: Family, Friends, & Strangers was a 2015 Colorado Book Award finalist. Three Threads Woven, was a 2010 WILLA Finalist. Her story, Sulfur Springs, won First Place in the 2011 LAURA Short Fiction competition. Her stories have appeared in Pooled Ink, The South Dakota Review, Fine Lines, and Women Writing the West online.
When not writing, she hikes desert canyons and alpine trails. She loves anything vintage, her shelter-rescued dog, Opie, and, most of all, her husband, Rob.