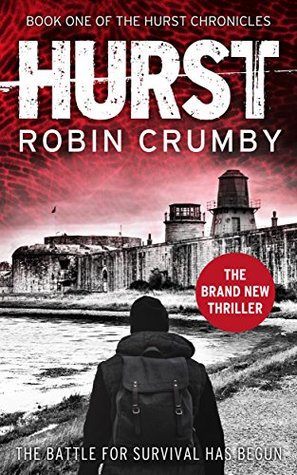 Source: received from the author, in exchange for an honest review

At the end of the world, surrounded by the tidal waters of the Solent, the survivors of a pandemic flu virus hide behind the high walls of a Tudor fortress. Scraping a living far away from the smoking ruins of the cities, they wait in hope.

Hurst Castle stands alone. Its seventy-four occupants united in a struggle for survival against all the odds. The Millennial Virus is the least of their concerns.

When the arrival of outsiders threatens to tip the balance of power, the people of Hurst are faced with a desperate choice: set aside their differences and join an alliance that promises new hope or unite against the newcomers and their plans for reconstruction. Who can be trusted? Only time will tell.

The battle for Hurst has begun.

This is one of the best dystopian novels I have read, as it presents a multitude of societies and different types of leaders with their own visions. In my opinion, this is the most important argument to attest for how interesting this book is.

We have a society in which no man is allowed, but only to contribute to reproduction, we have the people living at the Hurst castle – closer to normal, hoping to become the inhabitants of the new Earth and we have a society struggling to become powerful, with a leader whose only focus is to gain control over the only thing that will ensure his “ruling” – the cure. This diversity of mentalities and characters is so overwhelming and also quite close to reality.

We also gave a diversity of genres, from drama to mystery. So I can easily say this book is addressed to different fans of literature.

Well to close up quickly, “Hurst” is a different kind of dystopian novel. It is much closer to reality, it includes different genres and a wide variety of societies. This is definitely a refreshing book, that will send you in a battle for survival. Enjoy 🙂

Robin Crumby is the author of The Hurst Chronicles, a post-apocalyptic series set on the south coast of England in the aftermath of a flu pandemic. Since reading John Wyndham’s ‘The Day of the Triffids’ as a child, Robin became fascinated by end of the world dystopian literature and was inspired to start writing by Cormac McCarthy’s ‘The Road’ and Emily St. John Mandel’s ‘Station Eleven’. Why? Because post-apocalyptic fiction fires the imagination like nothing else.

Pondering what comes next, who would survive, what would life look like? Much of the best fiction in this popular genre focuses on brain-eating zombies or events unfolding in the USA so Robin determined to write a story set in the UK. His Eureka moment came wandering the shingle beach at Milford-on-sea, inspired by the beauty and rich history of the Solent.

Where better to survive the end of the world than a medieval castle surrounded by water? Robin spent much of his childhood messing about in boats, exploring the many waterways, ports and military forts of the Isle of Wight, where The Hurst Chronicles are set.