I’m Krystin Blackwood, and I’ve only ever been good at one thing: killing demons of Darkness. But at 24, I’m about to face my toughest challenge yet: shifting from working alone to joining a team of three other Hunters. Newbie Hunters.

But unfortunately for them – and me – Darkness has other plans. Lady Azar, Darkness’s heir, stole my new team leader’s kid two years ago. Now, she and her lackeys are rallying to exchange Ben’s kid for me because of the power I wield. I’m one half of a prophecy to save an ancient city the Powers of Good lost centuries ago. And if I fail or die before that happens, the destruction of that city will be felt across all planes of existence.

If we can’t find Ben’s son before All Hallows’ Eve and somehow save him without putting my life at risk, that existential explosion will absolutely happen. But it’ll be nothing compared to the destruction wrought if Lady Azar changes Ben’s son into a demon…and her minion

Because the only thing more dangerous than me with a blade is a father’s wrath.

Jessica Gunn is a New Adult author and avid science-fiction and fantasy fan. Her favorite stories are those that transport the reader to other, more exciting worlds. When not working or writing, she can be found binge-watching Firefly and Stargate, or feeding her fascination of the ancient world’s many mysteries. Jessica also holds a degree in Anthropology.

Shannon Condon is a New York City based Actor, Voice Actor, Improviser and Filmmaker. Shannon is a proud member of SAG-AFTRA, and is recognized by her unique voice and quick-witted humor. When not recording, she can be found playing with her dog/best friend, Maple. For more updates visit shannoncondon.com 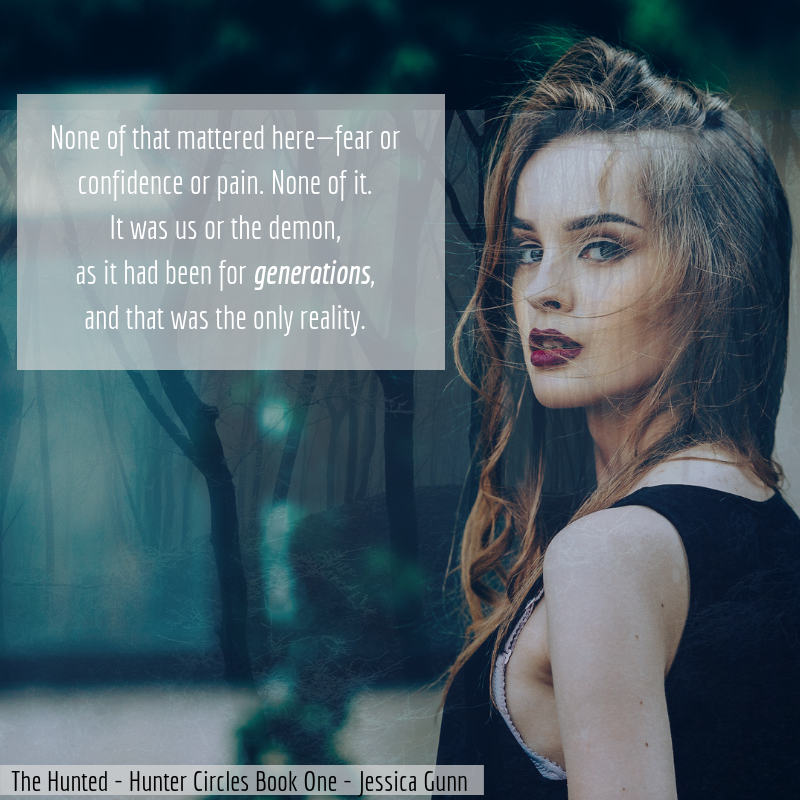 Finally a book with witches and elements. I was missing one of these in my reading stack! So maybe my enthusiasm and my love for everything magical and demons and elements, combined with the awesomeness of the book resulted in a high rating 🙂 Let’s analyze it a bit:

The story unfolds pretty fast and we know from the first pages who is hi and what do they want and that’s good because it leaves a lot of room for action and characters development. And we do have a lot of action scenes, as there is a lot of fighting and chasing. Both our main characters have a reason for fighting demons and they both have super cool powers. Krystin and Ben will have to work together so that they can achieve their goals and… So that everybody can live.

A fight that can unleash the powers of Evil is in the hands of a stubborn 24 year old and an impulsive leader. There is a lot of room for character development and there are many angles of the story still not explored. That only makes me eager to read more of the story. I must admit though that I would have preferred a longer book 1, with more time to savor the interaction between our protagonists. A small disclosure: be prepared for a very good cliffhanger and for diving directly into the next book.

The narration was good, with some minor steps outside characters. I did not dislike it, but I wanted to feel more of Krystin’s attitude in the narrator’s interpretation and maybe a little more recklessness into Ben. Not bad at all though.

Ok, conclusions time. I liked the series very much and there are premises for an epic story. I hope the next book will give more insight into the characters and their powers. But I loved what I’ve read so far. Looking forward to more 🙂

I received this audiobook as part of my participation in a blog tour with Audiobookworm Promotions. The tour is being sponsored by Jessica Gunn. The gifting of this audiobook did not affect my opinion of it.

Declarations of a Fangirl

2 Girls and A Book

4 thoughts on “Audiobook Review: The Hunted”