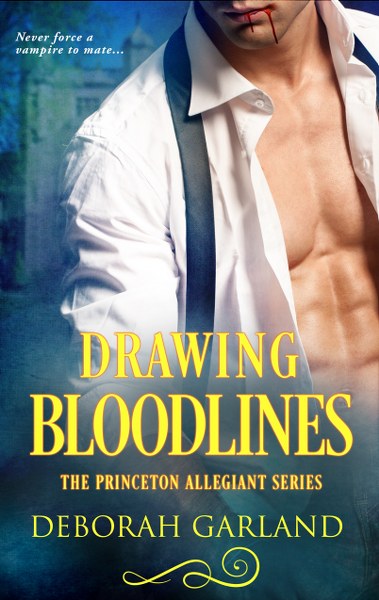 Award-Winning Author Deborah Garland presents a new paranormal series starting with Drawing Bloodlines about a vampire who takes a chance on love after a lonely century, only to be forcibly mated with a ruthless vamp from his dark past.
The TBR Pile said, it’s “sure to heat your blood,” and The Romance Reviews was “drawn into this new paranormal vampire world.”
Dr. Alexander Manning’s vampire allegiant demands loyalty and secrecy. Keeping their existence hidden from humans is the Prime Directive. So when he accidentally reveals himself to a woman, a beautiful woman he can’t resist, he’s forced to make a choice: report her to his commander or ‘deal’ with her himself.
Both Alex’s loyalty and secrecy are tested.
Elizabeth should be afraid of tall, handsome, god-like Alexander, who she’s figured out is a vampire. Knowing he’ll come for her, she prepares for the worst and even considers sending her daughter away to live with her ex.
Alexander shows up, not to harm her though. To seduce her. Nights of unending pleasure however take a very serious turn, neither was expecting.
Until Alex’s past catches up to him and threatens to destroy his precious secretive world with Elizabeth and loyalty to her and her adorable seven-year-old daughter.
Will Alex obey his allegiant commander and submit to a woman he hates, or fight?
Never force a vampire to mate…
The Princeton Allegiant Series features a recurring cast of hot and sexy vampires, but each book can be read as a stand-alone. No cheating. No cliffhanger.
Goodreads * Amazon

Book one starts with a blast. Either I was missing a vampire romance, or this book is actually great. I intend to believe both statements to be correct. I was indeed missing a steamy (oh, so steamy) vampire romance and this book is actually great.
Alexander Manning finds himself extremely attracted to Elizabeth’s blood and more. A visit to the hospital is what determines the encounter between the two and each has a powerful impression on the other. A lustful romance starts, that quickly puts her in danger. We have plot twists, strong vampires and did I mention steamy scenes?
Vampires in romance books should be 100 times more intense than a regular person falling in love. If this is achieved, then the author did a great job. Deborah Garland did it! Alex is fascinated by Elizabeth. He feels and makes her feel an immense passion. When danger knocks on the door (or not, just enters directly, no knocking), his predatory instincts kick in. The way he pays attention to her likes and dislikes is great as well. They help each other unravel long lost sides of their personality. He brings forward in her the desire to be a woman and to feel desired by someone and Elizabeth …she brings back the warmth in his cold heart. Oh, I loved it!
I don’t know what else to say. I will take a risk and repeat myself: I really missed a great vampire romance. Well, I got my whish 😊 If you are a vampire fan or if you just want to read a hot romance story, with strong characters that sometimes drink red liquids stored in human bodies, this is the book for you !!! 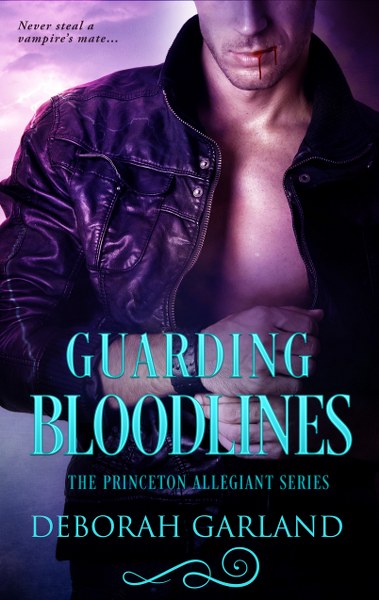 Never steal a vampire’s mate.
What’s the world’s most dangerous vampire to do when the only woman he’s ever loved is about to be abducted? He strikes a devil’s bargain, but Loren Tagaris is done playing nice.
Loren’s gifts for destruction have made him the most feared vampire on the planet. To bargain for his progeny’s freedom, he’s forced to bend the knee to the precious New York Vampire Lords and find their missing commander in thirty days. Or hand Julianna, who’s part witch, over forever.
Julianna’s powers are more dangerous than Loren ever imaged. When their hunt for the missing commander unearths a buried secret that terrifies even Loren, all bets are off, and it’s every vampire for himself. Suddenly the Lords abducting Julianna is the least of their problems.
Will Loren give up his own freedom once and for all to protect the allegiant world even if it means losing Julianna forever?
“Guarding Bloodlines and The Princeton Allegiant series is a refreshing twist on a vampire world which delivers on action-packed, deliciously sexy, fun reading that will have you turning the pages.” – Jennifer Bray-Weber, Award-Winning Author
Goodreads * Amazon

I got hooked on “Never steal a vampire’s mate”. Having loved book 1 so much was also a plus. I am addicted to vampire romances and I am not ashamed to admit it.

“Guarding Bloodlines” is Loren’s story, Alex’s sire. We know already from book one (which hopefully you have read before jumping into book two, just because it’s great and fabulous and steamy!) that Loren is powerful and feared by many. We know little of Julianna, the other human that he turned to vampire. Well now we learn! Loren and Julianna have a connection at least one of them is not willing to accept. Together they fight, they learn to cooperate, but they also learn to give themselves truly.

I loved the danger they face, I loved Loren’s determination and Julianna’s strength. The plot was much more intense in this book than in “Drawing Bloodlines” and thus much more enjoyable. I honestly read it in less than one day. I could not (and did not want to) put it down. He has to protect his mate and also the vampire world – kind of a big responsibility. But only the strongest of vampires can achieve these tasks, hopefully.

I loved it, read it, enjoy it, devour it! Because this is what must be done! 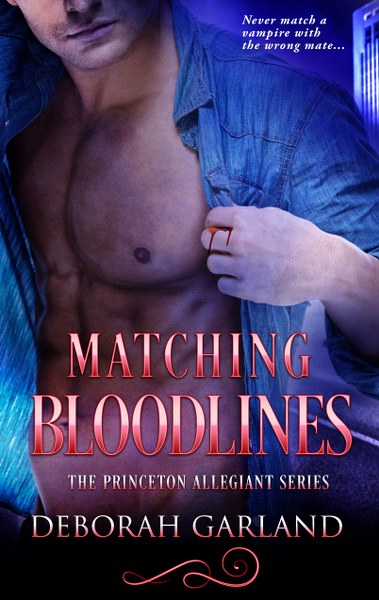 VAMPIRES DON’T DATE. THEY POSSESS.
Award-Winning Author Deborah Garland is back with an all new steamy vampire romance in Matching Bloodlines, an angst-fest about a vampire in search of a new mate and the matchmaker he hires who ignites decades of unmet needs and passion…only she’s off-limits.
Never match a vampire with the wrong mate…
Nothing could have prepared Francisco St. Claire for living as a single male after centuries of being mated. The serious and scary Commander of the Princeton Allegiant is now heartbroken and that makes him one dangerous vampire. Still, he has an allegiant to run and there is trouble on his borders.
When the ruling lords demand he hire a matchmaker to find a new mate for himself as well as the other males who have sworn to him, the loyal commander follows orders but vows he’ll never love again.
Princeton Matchmaker, Charlotte Kincaid is drowning in debt. She’s so desperate for cash, she agrees to work for a mysterious rich businessman requesting a ‘mate’, who just happens to be a vampire. If only this intoxicating Frenchman with the most sensuous lips she’s ever seen wasn’t her client.
Since meeting Charlotte, Francisco’s emotions and senses have awoken, including his primal need for a woman’s body against his. But if he takes Charlotte to mate and turns her, she can’t find matches for the rest of his vampires.
Will the Princeton Allegiant Commander show his strength by mating with the woman he craves or will he continue to follow orders?
The Princeton Allegiant Series features a recurring cast of hot and sexy vampires, but each book can be read as a stand-alone. No cheating. No cliffhanger.
Goodreads * Website

My Thought So Far

After reading the first two books, I am crazy to read the third one. I am a fan of these vampires and this universe. I hope to see them work together more at some point and see the stories intertwine. I like the covers, almost. I love the little blood details on them, even if I don’t get yet the detail on the cover of book 3. Speaking of, I was waiting to read Francisco’s story and I see he will “mingle” with Charlotte. That’s one more book to add on my immediate TBR! Stick around for more 😊 Happy Reading! 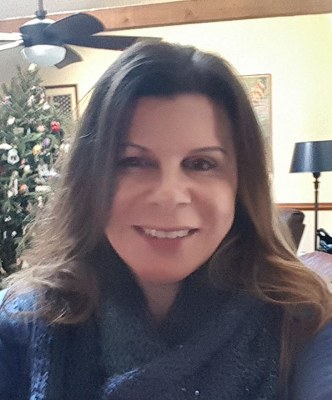 Deborah Garland is now an Award Winning Author! Must Be Crazy has won The Carolyn Readers’ Choice Award.
My newsletter followers get not only a good laugh each month, but also updates on new releases, sales and giveaways. Sign up now to get the new 2019 format: http://bit.ly/2HI3Mgc It’s a NO SPAM ZONE. Don’t forget to follow me here on Goodreads and BookBub: http://bit.ly/2jmpasE.
Deborah’s childhood on Long Island, NY can be described as Cinderella meets Carrie. A latch-key kid, she spent her days after school, cooking, cleaning and looking after her younger brother to help out her very strict working parents. Those hours of nothingness sparked a wild imagination and a few invisible friends.
After years of doing the whole corporate thing, it was finally Deborah’s turn to make the dream come true of being a published author. Her 2017 debut novel, Must Love Fashion, was a Golden Leaf finalist for Best Contemporary Romance. She writes strong and witty heroines and heroes that fall hard for them. Her novels have received words of praise from RT Book Reviews, Kirkus Reviews, InD’tale Magazine, Library Journal, and Uncaged Magazine. In addition to a great book, she loves pugs and chocolate ad eats her bacon cheeseburgers with a Grey Goose Cosmopolitan.
Website * Facebook * Twitter * Bookbub * Amazon * Goodreads * Newsletter