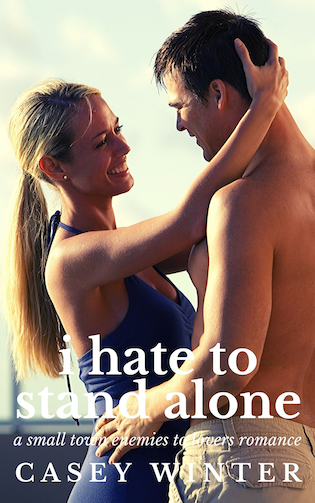 The small town I ran away from. The Navy SEAL I’m supposed to hate. If I can get through this summer without falling for the off-limits alpha, I’ll consider myself lucky.

Steamy, intense chemistry … is just one of the things I shouldn’t be feeling for Luke Nelson, soldier turned security agency operative. His brother and I were high school sweethearts, but he broke my heart. Plus, our families hate each other, à la the Hatfields and the McCoys.

I return to Little Fall, Maine, to care for my sick mom. He returns to fulfil his brother’s last wish of reopening their mother’s roller rink. I spent half my childhood at Family Roller … but never with him.

He was the older bad boy. I was the girl next door. Love was never an option. But now we can’t stop making eyes at each other.

As I reunite with old family and friends, I learn that Little Fall has just as many secrets as my heart. And even if I’m supposed to say no, my intrigue for dreamy, handsome, rugged Luke Nelson is off the charts.

It turns out I might have a second chance after all … even if it’s with my ex-boyfriend’s big brother.

This full-length romance has a happily-ever-after and can be read as a full standalone. It is free with Kindle Unlimited.

Subsequent books in the Little Fall series cover different heroes and heroines … though your favorite characters will make appearances.

I take a small sip of wine, letting its flavor burst on my tongue before swallowing. “You know how I hate to stand alone at parties?”

Penny rolls her eyes, a grin of reminiscence lighting up her face. “Do I remember it? Effing hell, Banana, it was one of the running themes throughout our childhoods. You couldn’t stand still, like ever. If you weren’t doing something, you were dying. That’s how it seemed to you. I remember one rare time when you convinced me to come to a party, I found you in the basement with a couple of the so-called dorks – June’s brother, right? – playing Dungeons & Dragons.”

“Oh, yeah,” I giggle, shaking my head at the memory. “I actually forgot about that.”

“I asked you what the heck you were doing, and you just looked me dead in the eye in that can’t-sit-still Hannah way and said, ‘Listen, Penny. I hate to stand alone. It’s as simple as that.’ All I did was go and use the effing toilet, girl. It wasn’t my fault Doug Helmsmore had a bad belly and I had to wait in line for the bathroom, was it?” She giggles. “But that was your little saying, whenever you threw yourself wholeheartedly into a new experience. If I ever called you brave, you’d toss your head and say, ‘It’s not brave, Lennie, I just hate to stand alone.’ But you were wrong, you know. It was brave, is brave, the way you throw yourself into stuff. I could never do it.”

“Thank you,” I say. “It’s really nice of you to say. But the point is, like, lately I’ve found myself standing alone at parties and having it feel sort of natural. Because even if I like my skating buddies, they’re not, I don’t know … they’re not home. Does that sound cheesy or what?”

Penny waves a hand. “Well, that’s great, then. If that’s really how you feel, it’s win-win. You’re happy and I get my bestie back. So what’s the problem?”

I pause, swallowing an awkward lump.

“Luke,” Penny says a moment later. “He’s the spanner in the works, right?”

“Is that why you keep checking your phone?” she asks.

Penny rolls her eyes. “Hon, you’ve checked it at least once a minute.”

“That’s crazy,” I mutter. “I really didn’t even realize. But yeah, he texted me saying he wanted me to give him a day, which is sort of annoying, honestly, since I thought last night—well, I guess I thought it meant something.”

“Go to Family Roller, then,” Penny says firmly. “Go for a skate. If you feel like talking to him, march right up to him and say your piece. If not, just skate. That sounds like a win-win, too.”

“He breaks my heart, just like his little brother did.” 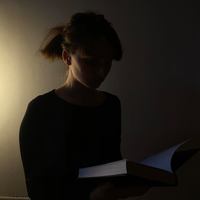 Thank you so, so much for checking out my books. My name is Casey and I just love to write romance with depth and characters you’ll be able to connect with. My current series is called Little Fall, named for the town where it’s set, but each book is a complete STANDALONE … that said, don’t expect Luke, Morgan, Hannah, or Penny (and many others) to disappear anytime soon! Little Fall is a town you can get invested in, for sure.

I just want to say I’m so grateful to you for checking out my work, and I hope you enjoy reading my romances as much as I enjoyed writing them (hopefully without less stressing LOL).

I’ve been writing ever since I was a little kid, sitting at my dad’s fireplace in cozy New England winters and penning stories in my Barbie notepad. More recently, I’ve switched the notepad for a laptop, but I’ve never fallen out of love with the craft. Now, I live in just plain ol’ England with a hunky husband and a Jack Russel named Loki.

I’d really appreciate if you could follow my Amazon author page, as I’m going to be around for a LONG time.

Bye for now! Or, should I say, see you in Little Fall …