There is a street that follows the water along the South Beach of Miami. Its name is Ocean Drive.

Among the excitement of South Beach, Kate Olesen has the perfect weekend romance with a mysterious and sexy artist. Jaded from her time as a divorce attorney, Kate is not willing to look past the two days and she returns home to Chicago. However, she can’t deny that this man that has changed her forever. Can she find a way to forget him…or does she even want to?

Dominic Price needs a woman that could see past his fame and fortune. He needs Kate. She’s brilliant, gorgeous and an art lover as well. This Midwestern girl is everything he’s been waiting for. Can he convince her to stay with him?

Kate’s eyes followed Jax’s as he looked around the shop to see which artists were available. And then she saw him.

Strands of dark hair, cropped short in the back, were left to fall just so over intense dark eyes and the creased brow of a deep thinker. Below the eyes was a strong pointed nose and a delicious mouth curved into a sexy smirk. He could have walked out of a 70s rock concert, with tattered shorts, a heavy leather belt, and a fitted t-shirt. He looked like a model, one of those half-naked men who leave the shirts they’re supposed to be selling balled up behind them. But the effortless ease with which the clothes hung off of him told her that he had probably thrown them on without a second thought. He was, in so many words, the epitome of the handsome mysterious stranger.

He was in the corner station, leaning back on a stool, legs resting on the client table in front of him. A book lay in his lap, forgotten when something had caught his attention. That something appeared to be Kate, the sexy smirk turned in her direction. Kate found herself unable to pull away from that smirk, those eyes. He was the complete opposite of her usual type and somehow also the sexiest man she had ever seen. She felt an undeniable sense of exhilaration, like she was a kid stealing a piece of candy. 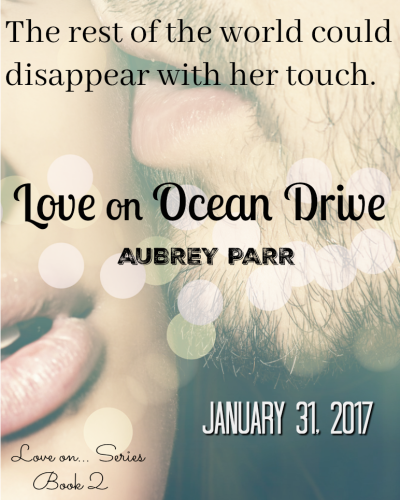 Aubrey Parr waited until her she was forty to publish her first novel. Although she received her Master’s in Accounting, Aubrey always knew that she wanted to write. She was inspired by her great-uncle, author Evan S. Connell. She lives with her husband and daughter outside of Chicago, Illinois and is currently writing book 3 of her Love on… series. When Aubrey isn’t writing, she can be found with a book in her hand.