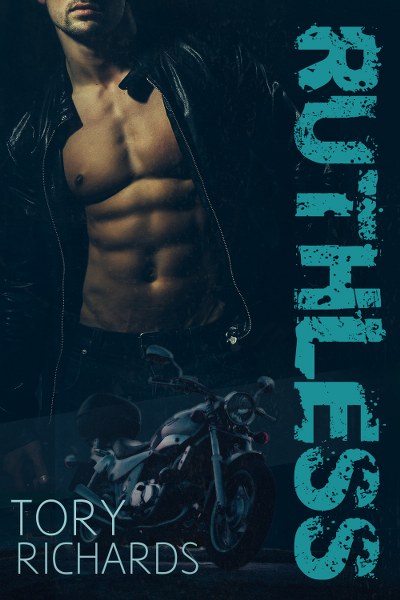 Four years ago Rebel ruined Ginger by claiming her to keep them both
alive, and then she disappeared. Bike Week at Daytona Beach brings
them back together. He’s a dangerous nomad. A ruthless killer. But
he’s her addiction, and she’s his. Can they keep the past where it
belongs and move forward, or is it too late?
No cliffhangers! Can be read as a standalone romance.
Warning,
contains explicit sex acts, language, and violence. Adults only!
Add to Goodreads
Amazon * Apple * B&N * Kobo * Smashwords

This series open up in full force! “Ruthless” made me fall in love with the series and with Rebel and Ginger. She’s seen it all – a vicious MC, with members that have no honor and enjoy making women suffer. Held against her will in the Red Devils MC, she finds an ally in Rebel, another bad guy, but with a conscience. She has no way but to trust him and in a very short period of time, they share something that none will forget, neither the good, nor the bad. Years later, they meet and things become complicated. Rebel is a nomad, he’s not the type to settle down and Ginger has trusting issues – very justifiable ones.

There is so much going on in this story. We have a lot of action and when you think things settle, another bad guy appears. The book is full of hot scenes and explicit ones. I would not advise it if you cannot handle a bad mouth. Rebel is a strong man, his only weakness being Ginger. As for her, she tries not to feel anything for the man, but she cannot forget that some time ago, he was willing to show her kindness, in his own way.

Ginger’s friendship with Della is so beautiful. When need arises, she is willing to risk her life to protect her friend. Ginger is a fighter, a smart one. Rebel’s nomad friends are also a curious type and I cannot wait to read more about them in the following books.

All in all, book 1 is a beautiful surprise and I cannot wait to tell you about the next ones in the series. 5 stars for “Ruthless”. Tory Richards surprised me and I am sorry I only managed to read her books now. I have so much to catch up!

And this will happen a few rows below 🙂

Jace is a nomad.
An outlaw biker who likes to work alone.
Fierce.
Dangerous.
A killer when he needs to be.
He calls no place home, and no woman owns his heart.
Until her.
Luna.
Add to Goodreads
Amazon * Apple * B&N * Kobo * Smashwords

“Dangerous” was a little bit of a letdown. We have Jace and Luna’s story and, while I liked it, there is a significant difference between Book 2 and Books 1 and 3. And I am a little upset and a little more frustrated, because there is so so much potential.

Luna is hiding from an abusive boyfriend, while Jase is in town to help the local MC club with business. Also a nomad, he has made friends in different MCs. So when his brothers need him, he says yes. No strings attached, no settling down. Luna, on the other hand, wants to lay low, forget and live a quiet life. She has limited contact with her family and is even reticent towards making new friends. Their attraction is immediate and what happens next is… again, full of action.

Same as “Ruthless”, we have a lot of explicit scenes, we have a lot of dirty talk but, as opposed to Ginger, I did not understand Luna. She appears shy and wanting to lay low, still she attracts the attention of the guys in the MC. I felt there were contradictions in the way she was created. Same goes for Jace.  Right now, he sees the innocence in her. But on the next page, he thinks the worst.

The scenes in “Dangerous” were too much for me, some I think were not very believable. Trigger warning for abuse and rape, but my respect for the author and how she treated the character involved in this.

Oh, and I almost forgot, there are so many explanations regarding the MCs and the rules. Sometimes they are even repeated. It felt more like a book 1, than a 2. I don’t know. It didn’t stay well with me. Hard to rate it, but I’ll go with 3 stars, for now.

Moody had had it all once, and had lost it in a heartbeat. Now he goes
through life as a cold, heartless nomad. A man to avoid and be afraid
of, uncaring that each day could be his last. He gives a fuck about
nothing and no one, until an innocent woman appears out of nowhere,
unafraid of his fury, challenging his demons, making him want to live
again. Is he strong enough to let her into his heart?

“Furious” brings us an interesting character. Moody is our third nomad and also a bar owner. He meets Bailey, hired by one of his most trusted employees to help around. What’s his reaction? Fires her. Yup, he fires her. He doesn’t think she’s able to hold her ground in a bad frequented by bikers and other dangerous people. When she is blackmailed to steal something from Moody, they begin a sort of game, in which everyone has to lose. Some their heart, others even more.

The story is very interesting, but what makes it even better is Moody. We know from the other books that he is not the talking kind and he has a past that still bothers him. His issues melted my heart and I have all my respect for him and for what he’s been through. Bailey and her getting involved with the wrong people was a little forced. With Moody’s influence, the situation could have ended a lot faster.

So with all my liking of the characters, I cannot overlook the small flaws we have in the action. Definitely “Furious” is better that “Dangerous”, but it does not come close to “Ruthless”. We see a more reserved biker, one that is afraid of lowering his guard and that is what makes  this book special.

4 stars for Book 3 and my appreciation to the author for creating such a beautiful character, with such a great mix of emotions.

As for my series review, I would have gladly given all the stars, if it were not for my issues with “Dangerous”.   By far my favorite book is “Furious”, definitely my favorite nomad is Moody. All books have a lot of action, all books have a lot of steamy scenes and explicit ones. So be aware, before going into any of them. I had fun reading them and I quickly became addicted to this series and to all the other characters from the other MCs. Tory Richards has her way with words and with creating strong and in the same time emotional characters.

Let me know in the comments below if you have read any of her books or if an MC Romance is something you would like to try of have tried already.

Tory Richards is an Amazon bestselling author who writes smut with a plot.
Born in Maine, she’s lived most of her life in Florida where she went
to school, married, and raised her daughter. She’s retired from
Disney and spends her time with family and friends, traveling, and
writing. .
Website * Facebook * Twitter * Amazon * Goodreads