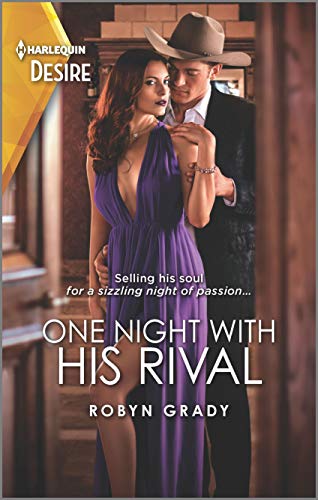 Title: One Night With His Rival

Wealthy horse breeder Ajax Rawson can have any woman he wants. So why can’t he keep his hands off the one woman he can’t have? Beautiful, independent and passionate, Veda Darnel is the daughter of his family’s biggest competitor. Years of bad business blood makes their affair dangerous…and forbidden. But will accusations of foul play end their star-crossed romance before it even begins?

Mixed feelings here. While I read this book in one sitting and enjoyed many aspects of the story, I do have some negative comments to mention.

The book faces Ajax Rawson and Veda Darnel, whose families have an old dispute, related to items of the heart. Always love gets in the way of a good relationship between friends. I won’t say more. A night of passion brings our main characters together and even if Ajax is willing to try the “relationship route” with Veda, she is not in a hurry to believe him. His reputation may have something to do with it. This combined with an accusation that Ajax has to face and also the family dispute does not help the young couple much.

Ok, I liked the romance, even if it was too much for Ajax. I mean, he spends a night with Veda and then he is all over his head – not very believable, but I can go with it. Still, most of the conflicts in this book are because of lack of communication. The discussions they have, the mistrust Veda has are a result of misunderstandings and not speaking openly. She does not want to believe in the grudge her father has for Ajax’s family, but she does little to prove it.

Somehow, the plot also feels a little thin and I am not referring here to the reason behind the dispute between the families, but also to the incident at the race tracks and who was behind them. How the conflict is resolved in the end feels rushed a bit.

While I would not disregard this book completely, I did find a few issues with it. I liked it, just not that much. Definitely I would continue with the series, as there are characters with interesting personality and I cannot wait to discover their love life 😊 Oh, and I still have to read book 1!

Cover review: Definitely I like the dress. I cannot see how the cover could have been reimagined to show the dispute between the families or to show the rivalry, so I cannot comment on the relationship between the cover and the story. But I do like it. It’s good.

Robyn received a book from her big sister and immediately fell in love with Cinderella. Sprinklings of magic, deepest wishes come true – she was hooked! Picture books with glass slippers later gave way to romance novels. When she was older, she wanted to write one.

However, in junior high, Robyn hit a stumbling block – a disheartening grade of one out of ten for a book review. Confused and hurt, she asked her hundred-and-thirty-year-old English teacher why the low mark? The wizened schoolmarm sniffed, “You obviously had a senior do it for you.” Thankfully Robyn’s business teacher was a honey.

Following a fifteen-year career behind the scenes in television, Robyn knew the time was right to pursue her dream of becoming a published author. Late in 2004, she received a phone call from a London editor. She’d submitted a manuscript to the Sweet line, which were featuring lighter, sexier stories to be released under the Tango banner. The editor was very interested in her story, but for a brand new line.

Robyn didn’t stop smiling for a week, but sometime later learned her revised manuscript hadn’t hit the mark. Then she received another call and another request for revisions to a second manuscript! That didn’t sell either. On a third manuscript she received a very long, very detail email, asking for, what would turn out to be, a complete rewrite. Having torn out most of her hair, but with 13 contest finals in 2006 (including winning the Golden Pen and Where the Magic Begins), she finished the rewrite then contacted a New York agent. That wonderful agent took her on, and Robyn sold in a matter of weeks, first to Silhouette Desire, then Modern Heat (Sexy Sensation/Presents) with a two book deal! She is currently writing manuscript number fourteen.

Robyn lives with her own modern-day hero on Australia’s Sunshine Coast with their three little princesses, as well as two poodles and a cat called Tinkie. She has majors in English literature and psychology, and loves new shoes, worn jeans, visits to the theatre and lunches at picturesque Moffat Beach with her writer friends.